UNSUB: A Novel by Meg Gardiner 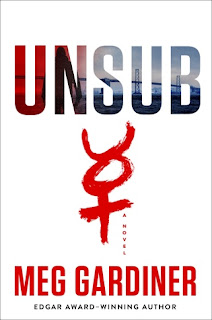 Mercury, the Prophet, the Messenger is a serial killer.  He’s been silent since the 1990s but now has returned in malicious, blood-curdling ways.  His first killing in years is a double homicide, accompanied by his message pounded into his victims’ chests.  UNSUB stands for unknown subject.

Detective Caitlin Hendrix cannot believe he has returned and is obsessed with finding him.  Her problem is that this killer is responsible for undoing her own father’s sanity and yet her father is probably the one who truly knows the psyche of this killer.  But insisting he unload all he holds in his mind may enable them to find the killer but destroy her father in the process. His partner had died in that investigation years ago and he had tried to kill himself.  This is obviously no mundane, predictable killer!

Clues begin to make sense, as more deaths occur and the killer sets his sights on Caitlin.  Caitlin seems like a vulnerable woman instead of an intrepid detective.  Her anxiety and fear of getting sucked into the power and control of this killer keeps the reader on edge as much as the grisly details of the killings set the reader’s psyche on shaky ground.  The plot’s intensity increases as Caitlin and other detectives figure out the time and even place where the next killing will occur but something always goes awry so they fail to nail the psychopathic killer.

The Prophet has some kind of affinity to the poet Dante and his famous work, The Inferno.  However, even knowing that doesn’t enable the reader to predict what the killer is thinking, feeling and how he will next act.

This is a superb psychological thriller that forces readers’ adrenaline to flow galore.  The twist at the end of the story makes one gasp with shock, an ending that guarantees a sequel to this novel.  Deftly plotted, Meg Gardiner!  We look forward to the follow-up to this amazing crime novel!

Posted by Viviane Crystal at 4:54 PM