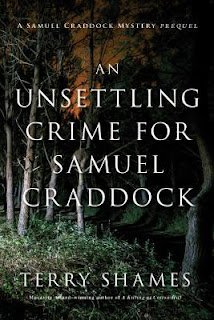 Samuel Craddock has recently been appointed Chief of Police in small town Jarret Creek, Texas.  Some treat him with respect and others scorn his office as he’s in his 30s, a very young age compared to most law officers in the area.  Because there’s not much crime locally, for the most part, Sam decides to try his hand at raising a few head of cattle.  He and his wife are about to welcome the delivery of these bovine additions to their family when he receives a call about a fire and something that should be seen immediately.  What he finds is so far beyond his recent experience in the Air Force, a grisly fire that burns five people to death and one of them has clearly been shot at point-blank range!

This then is the story of how Sam bypasses and gingerly maneuvers around the flagrant racial prejudice of another law officer and several people in the town, the rambunctious journalist who will do anything for an exciting story like this, corruption in the town, a major drug problem in the local high school, and those who do everything possible to impede Sam’s independent investigation of the fire and murders.  Add to that Sam’s dysfunctional family with a nephew who desperately needs some tender loving care beyond his own parents.

It's not just racial prejudice that’s rampant in Jarret Creek.  Certain “important” families think that their high status means they are untouchable when it comes to breaking the law.  It’s not until a crisis happens that Sam’s determined nature begins to transform from insecurity to maturity.

Crimes in these types of legal thrillers or mysteries are almost always solved and the surprise involves unusual investigative techniques and the unpredictability of the perpetrator or perpetrators.  However, there’s another element here, the abandoning of stereotyping everyone with the same brush.  So Sam gives the reader hope that lack of prejudice clears one’s mind to see things objectively and thus connect links toward a solution that not only solves the crime but also serves as a teaching moment for many who may have spurned such previous moments.

Nicely crafted Terry Shames!  This is a prequel to six other Sam Craddock mysteries – happy reading all!

Posted by Viviane Crystal at 3:21 AM