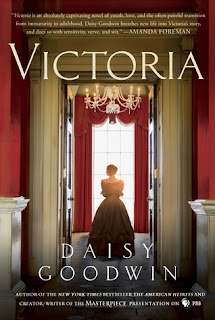 Daisy Goodwin wrote the novel, Victoria, while she was writing the screenplay of the PBS series due to be shown beginning in January 2017.  It is also ironic that it follows the biography of Victoria by Julia Baird almost simultaneously being published.  The novel about Victoria, however, is confined to the time between Victoria first becoming Queen of England at the age of 19 up to the time when she marries Albert in the early nineteenth century.  This is a very young Victoria, whose deepest consolations vacillate between her little dog Dash and the Prime Minister, Lord Melbourne or William Lamb.  So anxious is she to shed the advice of her domineering mother and her mother’s lover, Sir John Conroy, that Queen Victoria flounders, making many huge mistakes but somehow making up for them with her gracious ways.  Lord Melbourne clearly was the ruler’s right-hand man.

Although Victoria has received an education in history and other appropriate subjects for her role, she displays a child-like ignorance of many of the issues of pivotal importance in her kingdom.  So, we see how rebellion in Ireland, the protests of the Chartists, and other “situations” required Lord Melbourne’s guiding hand; but this is true of every day.   At the same time we see her kinder nature evident in those rebels who escaped hanging because of the Queen’s merciful nature.

Queen Victoria’s reputation is almost permanently ruined when she makes a very bad judgment about one of her ladies-in-waiting.  Thus the Queen has her first taste of the people’s favor dramatically turning, along with the realization that she rules with the approval (or not) of her subjects.


Many more fascinating scenes fill the pages of this notable novel soon to be seen in film.  Read it to the vicissitudes of how this young woman grew into the noble, intelligent and wise ruler of Great Britain for sixty-three years.  Daisy Goodwin has once again captured the essence of an age, royalty, and the world surrounding royalty!  This reviewer eagerly anticipates the film version of this notable historical novel!
Posted by Viviane Crystal at 6:19 PM