1492: A Novel of Christopher Columbus, the Spanish Inquisition, and a World at the Turning Point by Newton Forhlich 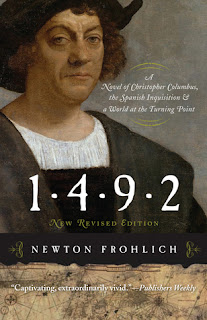 Whether you’re a fan of history presented precisely as it was or more engaged with a revisionist or reinterpreted depiction of history, you will be fascinated by this story of the forces impressing upon Queen Isabella of Spain, Christopher Columbus or Cristoforo Colombo as he is called herein, the infamous Torquemada who headed the Inquisition, the Santangel banking family and the Arab rulers vying for ways to hold onto Spain and other European areas.

It’s a terrible time for Columbus to be seeking funds for his plan to travel the seas on a new route to discover new lands with new treasure.  He’s got one foot in Christianity as a converted Jew and one foot in the old Jewish world of his origins.  For Isabella is convinced that it is the presence of Jews that is bringing a curse upon her nation and so is conducting a campaign to arrest, torture and kill all Jews, even the converted ones whom she believes are actually still conducting their Jewish customs in secret.  Rewards are dispensed for those who spy and report on secret Jews and this in turn sets off a flurry of “mob mentality” behavior where jealousy spawns reporting of Jewishness so that lands and monies may be claimed as a reward.

Muslim leaders attack Spain with astonishing brutality and lack of mercy.  However, Arab leaders do not trust each other and even begin to fight against each other.  This lack of unity will prove to be their undoing in spite of random victories.  The decimation of the Jewish population is believed to be a sign of victory over the Muslims and indeed one wonders how the two are tied together, if at all.

The Santangel family has Jewish origins but are so necessary to the financial health of the Spanish kingdom that more attention is paid to the family’s remarkable skills in investment and savings.  One son in particular doesn’t understand this and so he becomes a viable threat to the family and therefore kingdom’s prosperity.

Christopher Columbus’ wife, Filipa, brings him contacts and connections that will eventually finance his famous journey to the New World.  Although he will become a rich man, he cannot deny his Jewish background enhanced by his friendship with Beatriz.  It’s a thin line between the two worlds but one Colombo masters and which parallels the lives of far too many conversos in 15th Century Spain.

Newton Frohlich has crafted a dynamic, exciting, tension-filled novel about this paramount period of European history, a frenetic journey that was to shape not only the time covered in this novel but the future of Europe and the New World.  Well done, indeed, and highly recommended historical fiction!

Posted by Viviane Crystal at 10:03 AM

Email ThisBlogThis!Share to TwitterShare to FacebookShare to Pinterest
Labels: 1492 - A Novel of Christopher Columbus - the Spanish Inquisition and a World at the Turning Point, adventure fiction, historical fiction, Inquisition, Newton Frohlich