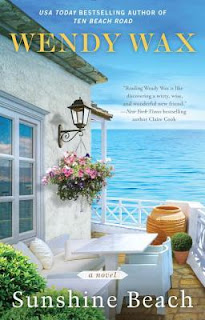 Wendy Wax is back to offer readers hope and optimism in the face of financial and emotional loss.

Avery’s relationship with her mother had healed but come to a shocking end upon her mother’s death, a loss keenly felt by Avery and accompanied by all too many associations to remind her of that empty spot in her life.
Maddie has fallen in love with a former rock star who has been through success, alcohol and drug rehab, and fear only to find himself writing again and being plunged back into the spotlight, along with every worshipping female from the past.

Nikki’s former lover, a star as well, visits Nikki and their son but wants the romance and love back; Nikki is wisely aloof although physically propelled toward him.

Maddie, Avery and Nikki lost all their money in a Ponzi scheme at the hands of Nikki’s brother. Devising a project to pay off debt and become financially comfortable is the present goal, easier said than done.

Now Maddie’s daughter, Kyra, during one of her runs, stumbles across an old, abandoned beach hotel in terrible condition.  The friends immediately upon seeing it want to restore it and make it another, but this time independent, TV series like their past ones which ended in disaster due to bad chemistry with others in charge of the projects. However, this novel has an extra glitch and a big one at that!  It turns out that the father of the present owners was murdered in one of the beach cottages and their mother disappeared on the same evening.  This turns out to be what is now known as a cold case involving the mother’s German background during the time of the Nazis in WWII.  The sisters who own the home are afraid to tear it down for fear that whoever killed their mother will not be caught, even though it’s fifty years after the fact.  Can all these sisters have it their own way – find answers to the murder and restore a beach hotel to new grandeur and pleasure for its designers and hopefully future customers?

Posted by Viviane Crystal at 3:29 AM