The Forgotten Soldier: A Pike Logan Thriller by Brad Taylor 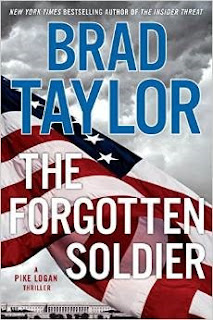 In a heavy-duty fight in Afghanistan, Guy George’s brother, Sgt. First Class Timothy George, is killed. It turns out that Guy’s brother was searching out terrorists but did not anticipate that they would get to him first or why.  Guy receives the material remains of his brother and his entire perspective changes when he finds the pictures of four of the men who were the objects of his brother’s search.  Guy realizes these were the men who directly or indirectly are responsible for his brother’s death, and Guy’s rage is palpable even to the reader.

Guy belongs to a Task Force that is off the record but approved by a Committee of upper echelon government players, including the President.  The Task Force includes Pike Logan, a friend and brother, no not by blood but by the bonds formed to protect and honor each member of the Team. After talking it over with his Team, Guy realizes that his brother is just another casualty and the American government couldn’t care less. Indeed at a meeting of this Committee, the players on Guy’s Team realize a very harsh reality, several realities in fact.

Greece is collapsing and the rescue of the Euro is paramount to worrying about a fallen soldier!  In fact, there are political machinations occurring, including betrayal by an American Senator.  No spoilers here but no one anticipates that Guy is about to go rogue and an Arab business owner, needed and used but not connected to Arab royalty, tied to his government will go to any length to guarantee their mission which is far from innocent. Will he succeed or be denounced and perhaps assassinated himself should he meet failure. The threats and dangers are vividly obvious!

Into the mix come Guy’s teammates who are trying to stop him and at the same time halt two other missions that may become globally destructive very, very soon.  The pace in this complex plot is relentless, the violence is mind-blowing in its ferocity, and the world of terrorism and assassination is starkly depicted in this all-too-real scenario. The hunter become the hunted and vice versa.

Get ready for a great read that will keep you up hours past your bedtime and compel you to seek out the other novels of this very talented, skilled writer.  Nicely done, indeed, Brad Taylor and highly recommended novel!

Posted by Viviane Crystal at 7:10 PM