The Threshing Circle by Neil Grimmett 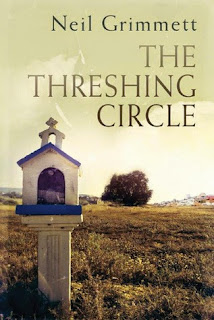 Warning – if raunchy language or scenes with graphic violence offend you, this is NOT the book for you.  However, if you love a story taut with tension and also enjoying a different culture, this is a novel that will grip your attention and thrill you with the excitement about a beautiful island, Crete, and the dark, violent plot about to enfold.

In 1942 in Crete a young English woman named Marianna, who is part of the resistance movement,  is caught by Germans. When they raid her home and see the red silk undergarment, that was originally part of a German parachute, she is executed while her child screams as she watches her mother die.  The child is taken away but it is actually a rescue as she is ultimately returned to her home in England.

Two years later a young couple, Patrick and Eleni, Marianna’s daughter, come to ferret out the truth and they too disappear.

Thus begins a tale of honor, courage and revenge.  The search for these missing figures is carried on by Kirsty a widow from Scotland and a village elder, Barba Yiorgos.  The authorities refuse to offer any information and when opposed take on a different tone with the investigators.  The bottom line, however, is that every participant winds up suspecting other characters and so the pages fly by, enticing the reader to believe he or she can figure out the few clues but in reality the secrets and plots offer stories within stories.

Greek culture, architecture, food and more are celebrated here.  One admires the feisty honor code of these people even while cringing at the stark brutality that results from violation of this code. The Threshing Circle would make a superb movie as it is so easy to visualize the intriguing characters and events that remain thrilling on every page.  Terrific novel!

Posted by Viviane Crystal at 3:06 AM