The Dream Lover: A Novel by Elizabeth Berg 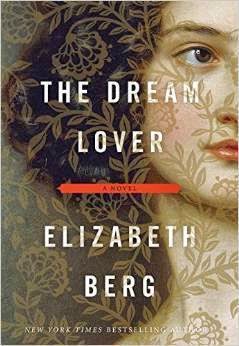 One may wonder what is that fires the thoughts and imagination of a great writer.  Then the curiosity is satisfied when we read about or encounter the depths of the character of that writer, a satisfaction one experiences when reading this novel.  Elizabeth Berg has depicted the childhood and adult life of the controversial but well-known writer, George Sand.   It matters not whether the reader agrees or disagrees with the lifestyle of any writer but one must acknowledge the creativity, uniqueness, passion and obsession behind the plots, characters, and ideas to be fleshed out on the page.

As a child, George Sand was born as the child of a rich father and a prostitute mother who adored each other. But her father’s grandmother never accepted her son’s wife and let her granddaughter know it at every opportunity.  As a result, the woman who was to become a famous 19th century author spent her childhood shuttled between relatives and a convent school.  She became cold-hearted in many ways, married but then came to an arrangement with her husband whereby she would live in Paris and return to their home for certain time periods to be with her children.

During that time, she met many writers who both supported and reviled her.  Obsessed with having the same equality with men, she eventually dressed as a man and engaged with writers and musicians, including Balzac, Chopin, Hugo, Delacroix, Lizt and more.  She found a great love and respect with the passionate actress Marie Dorval and had brief romantic interludes with other men.  But most of the time she took what one could only describe as a deep loneliness and disconnection from people into her writing.  While most found the characters in her novels to be biographical, she insisted they were a composite of everyone she’d ever met but whose idea were clearly and unashamedly her own.

Following George Sand’s development as a person and writer is fascinating but there is a serious lack in this novel about her writing, with only brief and vague references to certain characters and ideas.  One also wonders about what she discussed with all of the famous artists she socialized with initially and why they abandoned her or even if it was she who abandoned them.  It leaves many questions the reader may form unanswered.

Elizabeth Berg is quite astute in depicting the complexities of a character and it is here she excels in forming a portrait of this enigmatic, troubled but talented writer whom readers have found intriguing and highly skilled over time. George Sand’s eccentric personality gave passion and clarity to the world she created in fiction.  Fascinating novel!

Posted by Viviane Crystal at 3:00 AM