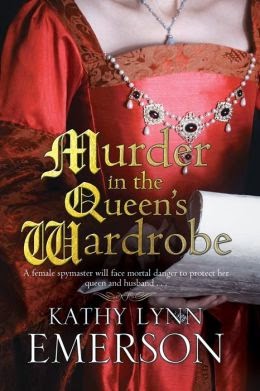 Mistress Rosamond Jaffrey is married but separated from her husband and living independently.  She is wealthy, educated and intelligent as well.  While she has no problem filling her days, she is now drawn into the service of Queen Elizabeth’s cousin, Lady Mary, in London in the year 1582.  However, she’s not there to be a semi-servant to Lady Mary but to be a spy for the Queen’s chief spymaster, Sir Frances Walsingham, a man who knows everyone’s business and shares his knowledge sparingly if at all.  Now Rosamond is to be his ears and listen to the gossip of Lady Mary and her ladies in waiting,  Rosamond is not sure what she is to hear, but it doesn’t take long to realize that it seems someone is trying to arrange the marriage of Lady Mary to the Tsar of Russia, Ivan the Terrible, a tyrant whom all fear and few trust.

The mystery deepens when several murderous attempts fall on first Lady Mary and then on Rosamond herself.  Lady Mary is believed to have succumbed to a dreaded disease when in fact she is the victim of poison.  On it goes with events conspiring against Rosamond that look like accidents but occur too frequently to be coincidence.

In the meantime, Rosamond’s husband, who is living in Russia supposedly doing busy with a Muscovy merchant company, has been distracted by the widow of an Englishman who was executed as a traitor.  The Tsar will not let this woman return to England and so she lives in dire poverty and miserable conditions.  Soon Rosamond’s husband is feeling more than pity for this young, attractive woman and he will bear some very harsh consequences for his attendance upon this woman and his plan to free her to return to England.

Rosamond at first has to mentally explore who could be responsible for attempting to harm Lady Mary and why they are trying to make sure a marriage and alliance with the Tsar never comes to pass. As in any well-thought out mystery, each character has some flaw, weakness or political connection that could provide a motive for a plot to harm the Queen’s cousin.  Rosamond herself is betrayed a few times and has to come up with some very rapid reasons for explaining her presence as a lady-in-waiting to Lady Mary.

All in all, Rosamond is a clever, ingenious sleuth who keeps the reader guessing on every page and flipping the pages to relish each engaging misunderstanding, attack, clue-ridden occasional dialogue, and violent scenes occurring to Rosamond and her husband Rob.  A splendid read that is highly recommended for all lovers of well-crafted mystery fiction.

Posted by Viviane Crystal at 3:27 AM