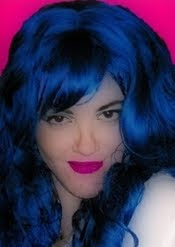 THE NOT-SO-SECRET LIFE OF AVERY FLYNN…

(apparently all we had to do was ask…)

ABOUT AVERY FLYNN…The name Avery Flynn is a pseudonym for the author who, at least for now, prefers to remain behind the scenes. She believes having Avery for her alter ego is a very good thing because, as she says, “Pen Name Avery is way cooler than me. Her favorite color is hot pink. She drinks single malt scotch on the rocks. She loves the Argentinean tango and stays at ’s Ice Hotel.” She recently celebrated the publication of her first novel, UP A DRY CREEK, the first novel in her Dry Creek series. Having conceived the Dry Creek books as a digital first series, Flynn plans a minimum of three more novels, including A Dry Creek Bed, which she has just completed.

We already know that you spent part of your childhood in a small town in western Nebraska since you’ve shared that it inspired Dry Creek, Nebraska, the setting for you first novel, Up a Dry Creek. What are some of the other places you’ve lived? How long?

Itchy feet are what we call the urge to move in our family. Growing up we moved nearly every year and not always far away. Example: We lived in five houses on the same street. Crazy, I know, but here’s the big moving breakdown: Born in Washington, moved to Kansas, moved to California, moved to Nebraska, moved to Missouri, moved to Texas, moved to Georgia, moved to Florida and, finally, moved to Virginia. We live in the Washington D.C. Metro area and I love it.

To this day, I get itchy feet after about a year in one spot. Instead of moving houses, now my husband comes home from work every few months to find the living room, kitchen or bedroom furniture rearranged.

What sort of jobs have you held?

I’ve had a ton of jobs in my life. One of the most amusing was working as a cashier in the Walmart in my small hometown. You never realize the beautiful strangeness of people until you see all of the crazy things they buy at Walmart. In college, I worked with mentally handicapped adults. I have an aunt who is mentally challenged and as a child, I was scared of her and avoided her wet kisses like the plague. Taking on that job was a way for me to confront how uncomfortable I felt around those with intellectual disabilities. The residents taught me far more than I was ever able to share with them. After college, I worked as a police reporter for a decade. I’ve interviewed death row inmates, stood outside during hostage standoffs and held hands with a woman who’d just lost her son to a murderer’s bullet. The bravery and strength of those I met have stayed with me. I still feel honored that they were willing to let me help them share their stories with the world.

Motherhood—you have a job plus your writing and you’re raising a family. How do you do it all?

Some days quite badly, but luckily those days are few and far between. I have three rambunctious kids (eight, five and two), two arthritic dogs and an amazing husband. I couldn’t do it without their support. My husband was deployed for a year to . During that time we bought a house and moved. (I believe I mentioned crazy runs in the family.) My friends thought I’d finally taken on too much, but I’m a firm believer that you do what needs to be done. Don’t whine (well, only to good friends). Don’t hedge. Just do what needs to be done. I look around and see women doing it all the time. Time’s short, money’s tight and patience is thin, but we women always manage to get the job done.

The family you grew up with—brothers, sisters?

I have one older sister, who is an amazing artist, mean rummy player and has a brilliant sense of humor.

Will you tell us a bit about your family background?

I come from a long line of stubborn women toughened by the prairie winds and the constant demands of rural life. Where some may have seen hardship, the women of my family pushed to make their own ways. One grandmother traveled from to during World War II to aide in the war effort. There she fell in love and married a dashing pilot who never came home from the war. Pregnant, the new widow moved home to raise her son. But she never gave up on life. She went on to fall in love again, become the county treasurer and didn’t stop mowing her own lawn until she was nearly ninety. It’s this kind of flinty reserve that defines my family.

Who are some of the authors you most enjoy reading?

All of them. :) No really. I read everything from romance to mystery to science fiction to children’s to non-fiction to cook books (hey, I’m trying). If you got a peek at my book buying records you’d think I was buying for thirty very different people.

Who are some of the authors whose work has influenced your writing style?

I once spoke to an amazing, intelligent man who could easily say he knew everything about everything and had nothing left to learn. Instead, he said he took knowledge from every experience, every encounter and every class he took. I feel the same way when I read. When I think I can’t learn something from nearly every person I read, then it’s time to hang up the keyboard.

What living writer you would most like to meet?

Harper Lee. The woman is a mystery and doesn’t give interviews. How fascinating to be such an amazing writer and to walk away from it knowing you’ve written the book you were meant to write.

What writer from the past you would most like to meet?

Margret Mitchell. I love Scarlett O’Hara—the ultimate anti-heroine who did what needed to be done.

What are you favorite types of books? Historicals? Contemporaries? Biography?

I need passion, humor and adventure in my books, whether that comes dressed in Regency clothing or in alien skin doesn’t matter.

Who are some of your favorite authors?

Oh, can I cheat and say everyone? No? Well, if you look at my bookshelves you'll find lots of Charlene Harris, Lori Foster, Laurell K. Hamilton, Lora Leigh, Tana French and a ton of others. Did I mention I'm doing my best to single-handedly keep Borders in business?

What compels you to write?

A perverse work ethic and being a glutton for punishment? Just kidding. My dad gave me a baby blue Brother typewriter before I could even read. I wrote gibberish stories about my stuffed animals and haven't stopped since. However, I will say my spelling has gotten much better.

When did you first start reading romance?

Way before I probably should have. I remember getting busted in sixth grade with a copy of The Thorn Birds.

What are your favorite sports and teams?

Do you here that sound? It's my husband laughing. I come to my sports affiliations through marriage and am contractually obligated to root for the New Jersey Devils, New York Giants and the Evil Empire AKA the Yankees.

Who are some of the people you most admire?

Those who aren't afraid to try something new be it food, a job, an adventure or a place.

Who are some of the people who have most influenced you?

My mom was and is a huge influence. Also my husband who, despite a tendency to say the most boneheaded things, is my number one supporter.

Which living person would you most like to meet?

Hillary Rodham Clinton. Love her or hate her, you can't deny she is fascinating.

Which person no longer alive would you most like to meet?

My dad died when I was in first grade. I've always wanted to have a grown up conversation with him.

What are some of your favorite charities and causes?

What are some of the national organizations to which you belong?

I belong to RWA, the Washington Romance Writers and RWA's romantic suspense/mystery chapter, Kiss of Death.

Can you give us a look at what is on your professional schedule moving forward?

I’ve just finish the second installment of the Dry Creek series with two more to follow. Also, I have another heroine whispering in my ear for a new series.

Besides Up a Dry Creek? (Sorry. Just can’t help myself.) There is a ton of great stuff out there. I just finished Lori Foster's latest, When You Dare (totally awesome) and Janet Evanovich has a new book this month that I can’t wait to get my hands on. For a little something different, I'd recommend Anthony Bourdain's Medium Raw and my all time favorite true crime novel, In Cold Blood by Truman Capote. Also give your new e-reader a workout and try someone new from an independent e-publisher like Evernight Publishing.

Up a Dry Creek is available at these online retailers…

Posted by Viviane Crystal at 5:51 AM