Moth and Spark by Anne Leonard 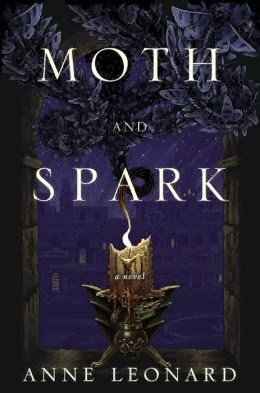 Peaceful Caithen is about to go to war, but this is not just any human war with its terrible destruction and at least a chance of winning.  This is a fantasy land surrounded by the Mycenean Empire and the Sarian nation, lands where the depths of darkness reigns with dragons, wizards, poisons, and darkness never imagined.

Tam, the daughter of a scholarly and brilliant doctor, knows about some of these terrors but refuses to be intimidated by them.  Yes, she knows fear but isn’t ruled by it.  Chaperoned, she arrives in Caithen and almost immediately sees someone die and has a horrific vision during the event!  This vision does terrify her and distracts her from the normal courtly gossip and jealousies that are routine matters here.  That’s all about to end though as she meets Corin, the Prince of Caithen, a handsome, strong man who is about to fall hard and fast for Tam, a commoner!

Corin knows something recently happened to him that is to be immensely significant to him and his kingdom but for some odd reason he just can’t remember.  However, he has little time to ponder that as it is clear the Sarians have begun traveling to attach not only Caithen but also every town, village and city between their land and Caithen.  Corin is tense with worry and plans for a battle he knows they cannot win, because of the dragons who will be part of the attacking army.  After many short, serious and sweet conversations with Tam, he not only knows he wants to marry her but also that she has some secret powers that he could use in his plans but which he avoids initially because of his fierce need to protect her.

These are two level-headed, practical characters who know when to be fiercely romantic, sometimes surprisingly on the part of bold Tam.  Though she has never loved like this and felt such desire, she abandons herself to what her body and mind are telling her.  This develops into not only passion but also the realization that she will not be shunted away out of danger but instead will play an integral part in the plan Corin has to save Caithen before the Sarians can destroy it and all who reside therein.
Readers will enter the world of magic, mesmerism, dragon flight, “blood dust,” and finally an internal battle in the depths of the earth that are stunning the way the author describes them.  Corin and Tam may prevail but the journey will be almost indescribably dangerous and not without unforeseen consequences.

Anne Leonard knows how to craft a paranormal fantasy that is never dull, intriguing with just the right amount of details, and cleverly plotted to impact on the reader’s interest.  You won’t be able to put this down; and if you’re a new or old fan of fantasy, this is definitely a MUST for your next read!  Highly recommended!

Posted by Viviane Crystal at 6:37 PM